Fishing is a past time of continuous improvement. Every time you go out, you find a different way to target fish. A new knot, a different presentation, an eye-catching color… As you find new ways to hook more fish, so do we. This year, we’re proud to present fresh innovations from the Strike King team that will catch you more fish. We’re committed to rounding out your tackle box with line, hard baits, soft baits, wire baits, and more, all with irresistible actions and lifelike colors.

Introducing the new-for-2022 Strike King lineup, designed by our pros to deliver time after time.

With so many fishing lines to choose from on the market today, Strike King has made the decision easy - just choose the best.

Introducing Strike King CONTRA, the innovative, performance-class fishing line that is priced for exceptional value. No longer will anglers sacrifice top quality line to find one they can afford.  With CONTRA, anglers can expect the best of both worlds - next-generation performance and a reasonable price.

To develop the CONTRA Series of Fluorocarbon, Monofilament and Braid, Strike King turned to world class engineers and state-of-the-art manufacturing, as well as some of the top anglers in the sport.

MLF pro Andy Montgomery was an integral part of a team assembled by Strike King to take on the challenge to engineer a next generation line with unmatched performance-grade properties at an unbeatable price point. Montgomery, himself an engineer with a degree from Clemson, did not take the challenge lightly. “We were driven to create a line that would meet the demands of the serious angler,” Montgomery said. “But I grew up fishing on a tight budget, and it was important to me to build a line that the average angler could afford.”

The result is CONTRA.

Strike King Lure Company is pleased to work with MLF pro angler and back-to-back FLW AOY winner Andy Morgan to develop the Chick Magnet flat-sided crankbait.  Partnering with Strike King's innovative design team, the Dayton, Tenn. pro harkened back to his upbringing on or around Lake Chickamauga to develop the Chick Magnet.  "It is great to finally see the flat-sided crankbait getting the attention it deserves," said Morgan.

While the flat-sided crankbait has a rich history in Tennessee and the Carolinas - where Morgan cut his teeth - it has proven to be highly effective style of bait nationwide. "Those early lures I remember so fondly were designed by garage craftsmen out of balsa and cedar, and they had action like no other,” said Morgan.  “That's what our team at Strike King had in mind when we envisioned the Chick Magnet, and I think we were true to those early designs."  The thin body design of the Chick Magnet and the circuit board lip impart a tighter wiggle and an exceptionally lifelike action to the lure.  "The Chick Magnet has the perfect action, that wobble and thump, that makes it really get bit," Morgan added.

The Chick Magnet is ideal in the three-to-six-foot depth range and anglers will certainly see the design's benefit for targeting fish in tougher conditions; the Chick Magnet excels in cool water, when fishing pressure is high, or after a weather front has made finding a bite more challenging.

To engineer this innovative design, Strike King turned to arguably the most proficient skipping and pitching angler on the water, Bass Pro Tour veteran Andy Montgomery.  For two of his tour-level wins in his career — on Lake Norman and Smith Lake — the Blacksburg, SC native credits his ability to skip a lure into the dark recesses underneath a dock to target tournament-winning fish.

Always known for breakthrough innovations, Strike King is adding a new sound for one of best-selling crank baits of all time. For 2022, Strike King announces the 6XD Hard Knock. Strike King has taken the time-tested 6XD and applied the popular Hard Knock technology to it. They maintained the exact same shape, weight & proven action, but added a single weight configuration that adds a deep thumping sound that makes it have a different appeal to offshore bass.

The Strike King 6XD was first released to the market in 2011 but was brought to the attention of the fishing public in June of 2010 when Strike King pro and bass fishing legend Kevin VanDam won the Bassmaster Elite Series Tennessee Triumph on Kentucky Lake with a four-day total of 92 pounds, 5 ounces.  In winning that event, VanDam highlighted the lure that he and legendary Strike King lure designer, the late Phil Marks, teamed up to produce.  The pair would also collaborate on several other projects, but the 6XD has been perhaps their most admired result.

To this day, the 6XD remains a lure that serious crankbait anglers rely on and knowing how many of the deep diving plugs get presented to bass across the country, Strike King took what Marks and VanDam built and added a new sound to help anglers trigger strikes in a new way. 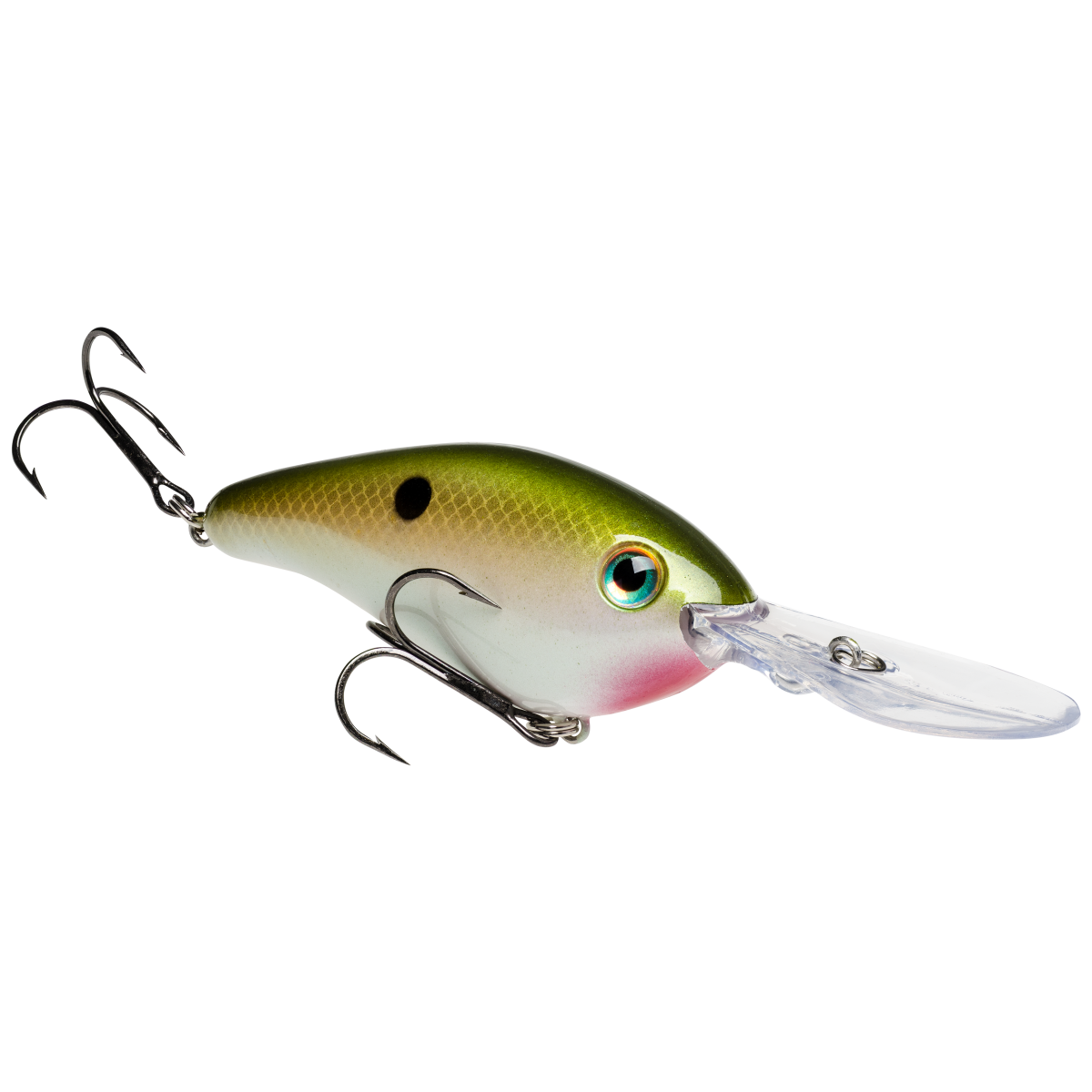 Strike King is pleased to announce that it has expanded the lineup of one of the most successful soft plastics on the market.  Following up on the immense popularity of the Strike King Rage Bug, Baby Rage Bug and the Magnum Rage Bug, the company introduces the new 3.38” mid-size Rage Bug.

What makes the Rage Bug so important to avid anglers is that it can put fish in the boat in so many different situations.  The man who understands this bait’s versatility better than anyone is MLF pro Andy Montgomery.  “The Rage Bug is the bait with the ultimate in versatility.  I cast it, I pitch it, I skip it and I use it as a trailer on a Skipping Jig,” said Montgomery.  “Its thin body allows easy penetration with a worm hook, so I use it Texas-rigged a lot.  I will put it on the back of a Strike King Thunder Cricket.  In shallow vegetation, I even fish it as a topwater, because its flat profile makes it such a deadly wake bait.”

Mark Zona, world class angler and television host and commentator relies on the Squadron Head year-round across the country.  “The thing I absolutely love about the Squadron Head is how versatile it is, and having a weedless version makes it so much better,” said Zona.  “I use it to rig swimbaits, like the Shadalicious, Rage Swimmers and the Glass Minnow.”

The head is not limited to baitfish imitators, however, Zona said that he has found other uses for it.  “I use it to fish Rage Bugs and I can I slow roll it across the bottom, bouncing it over rocks or skip it under docks, said Zona.  “I fish it literally everywhere; and now, the thing is weedless.”

In 1964, a small-town angler with a creative spirit began building a revolutionary new lure out of his garage in Memphis, Tenn.  He used handmade skirts and safety pins to fashion what he called the “New Original Strike King Bass Lure,” with a single, spinning blade.  The old catalog pictures of this wire-framed piece of fishing history are reminiscent of a lure that is in virtually every tackle box in the country today.  But 55 years ago, it was not called a spinnerbait.  It was simply called the Strike King.

To put it simply, we want our baits to produce often and to yield big fish. We know how important color is to entice bites, so we’re always creating new colors and expanding colorways in our existing bait lineup. This year, we have exciting color additions for Rage Swimmers and Thunder Crickets. Beyond that, we’ve also introduced the Fire Craw color to a large assortment of hard and soft baits.

For more than a quarter of a century the Strike King Lure Company has crafted the most dependable and stylish fishing eyewear in the industry.  Strike King is back in 2021 with a new lineup, delivering new styles, and even better science.